Bellway hints at growth plans after 21% rise in homes built 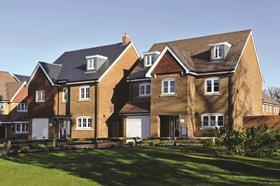 Housebuilder Bellway this week said there was no limit to the size it could grow to, as it unveiled bumper full-year results on the back of a 21% rise in the number of homes it built.

Bellway group finance director Keith Adey said the firm, which sold 6,851 homes in the financial year to 31 July 2014, could potentially grow to the same size as its biggest rivals – Barratt, Persimmon and Taylor Wimpey – which build up to double the number of homes, if market conditions allow.

Adey said: “There’s no artificial cap on potential volume that we see. We don’t see why we couldn’t exceed 10,000 units. The tier above us produces around 12,000 units, there’s no reason, theoretically, why we couldn’t do that.”

He said the firm would grow 10% this year and reach an output of 8,000 homes within two years, but that beyond that expansion would depend upon market conditions. “In terms of how long it takes us to get to 10,000 units – I’m not going to say we’ll get to it by a certain date,” he said.

Adey said the firm, which operates from 15 divisions, was planning to open another division in the south of England in the second half of its current financial year.

Adey also revealed that the firm was continuing to experience difficulties and price rises related to shortages of labour and materials, particularly in London and the South-east.

He said construction costs were up 3-5% nationally and at least double that in London. Certain trades, such as bricklaying, had seen wage rates rise by 10-15% in the last year in London, he said.

However, Adey said the firm didn’t have any schemes on hold due to shortages of labour or materials.

Bellway chairman John Watson, said: “This has been an exceptional year of progress for the group in which we have delivered record revenue and profit.”