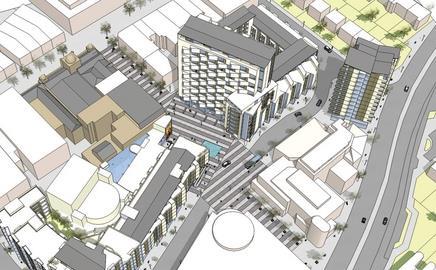 Bellway Homes has been chosen to carry out a regeneration scheme in east London designed by Levitt Bernstein.

The Newcastle-based housebuilder was chosen by Redbridge council to lead the Levitt Unity Square project in Ilford town centre.

The development will be carried out by the company’s urban regeneration division, Bellway City Solutions. It consists of 491 flats, 33,000ft2 of office and retail space, a theatre and a new public space, Unity Square.

Bellway beat Barratt and Crest Nicholson to the project. Countryside Properties was also shortlisted, but dropped out because of its workload from other projects.

Bellway, which recently announced its intention to increase its work in the south of England, is also developing the Thames Gateway’s biggest housing development at nearby Barking Reach.

Redbridge is using the Ilford scheme to finance the redevelopment of the Kenneth More Theatre, the borough’s main arts facility. Levitt Bernstein’s scheme will refurbish Ilford’s unused Victorian town hall to provide additional performance and ancillary space for the theatre.

Bellway’s key partners on the project will be Coplan Estates, which will develop the scheme’s commercial elements, and the Metropolitan Housing Trust. Landscape architect Whitelaw Turkington has been selected to design Unity Square.

Redbridge is understood to have been seeking a keen price for the project, given the values it is possible to secure in east London.

A Barratt spokesman said: “We felt we put forward a tremendous scheme and we are very disappointed we didn’t get it.”