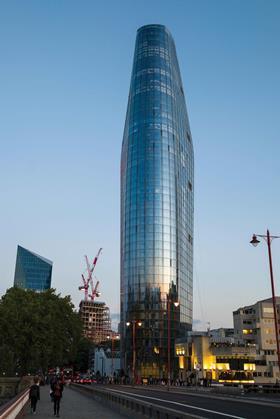 Berkeley Group announced a previously flagged fall in annual pre-tax profit in the year to April.

Profit during the period fell more than one fifth to £775m but the firm had previously said earnings were likely to slip thanks to sales on a number of high-end sites in London coming to an end.

And the One Blackfriars (pictured) developer said pre-tax profit was expected to fall by a further third this year.

But it told investors it was well ahead of its plan to deliver £3bn in pre-tax profit in the five years to the end of the 2020/21 financial year.

It added the ongoing Brexit delay was not helping housebuilders build more homes.

“Businesses are used to, and indeed thrive on, changing economic and commercial conditions but they do need a supportive and stable political and regulatory environment to invest with confidence and stimulate growth,” it said.

The firm has net cash of nearly £1bn and forward sales of £1.8bn.

Berkeley also revealed its remuneration committee was consulting with shareholders over a new three-year remuneration policy that it will put to the firm’s next AGM in September.