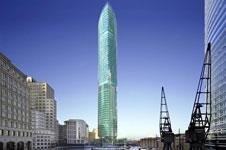 London mayor Boris Johnson has approved a significant planning application in Tower Hamlets, on the condition the developer contributes £4m to Crossrail.

In August, the Columbus Tower was refused planning by Tower Hamlets council, but later that month, the mayor exercised his new planning powers and took over the planning application.

The case was presented today at a public hearing at City Hall, by Johnson's own planning officers. Both supporters and opponents made their case, but the mayor decided to grant permission.

It is hoped the Columbus Tower will pave the way for a major development in east London. The construction of the 63-storey building will include thousands of square feet of new office and retail space, as well as 192 hotel rooms and over 74 apartments.

The development, which will add to the regeneration of the Isle of Dogs, has conditions attached to its planning application.

This includes the developer contributing £4m towards Crossrail and over £1m towards affordable housing in the area. Over £2m will also be invested by the developer into the local community.

Johnson said: "I have now had the chance to consider the Columbus Tower application in great detail and, more importantly, had the opportunity to listen carefully, and in person, to the arguments for and against this proposal. I am satisfied that all the major concerns have been addressed and I believe the application will not only strengthen the success story of the Isle of Dogs, but will be hugely beneficial to the whole of London.