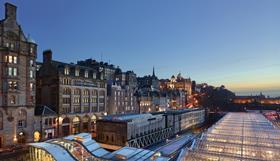 A £15m boutique hotel development on a gap site in Edinburgh’s historic Old Town has been submitted for planning by jmarchitects.

The project, which the Edinburgh-based practice has designed for the EDI Group, will create a hotel overlooking the gorge which runs through the city.

The seven floor, 98-bedroom hotel, will include a resident’s lounge and executive area for guests on the top floor with panoramic views of the city.

The new hotel will be situated in a prime location within Edinburgh’s Unesco World Heritage Site facing north towards the city’s New Town across the Waverley Valley.

The gap site on Market Street would see the demolition of a vacant former garage building, which has remained unused for more than 50 years.

A planning application and concurrent conservation area consent application for demolition have recently been submitted by jmarchitects on behalf of the EDI Group Ltd, which is owned by Edinburgh council.

The hotel would be situated close to Waverley, the city’s main railway station.

Rod Duncan, design director in Edinburgh studio, said the scheme was a site specific response to the Old Town’s historic patterns. He said: “The design is intended to be non-invasive and respectful of its neighbouring buildings while at the same time unapologetically of its own time and culture.”