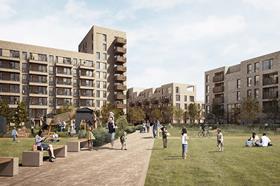 Bouygues is being lined up for an £85m housing scheme in east London, the first phase of the redevelopment of Gascoigne Estate in Barking, Building understands.

The redevelopment of the eastern side of the estate includes 421 homes, a medical centre, energy centre, commercial space and open public spaces.

Joint developers Barking and Dagenham council and the East Thames housing association are close to appointing Bouygues on the project, according to market sources.

The news comes as this week Bouygues confirmed it had secured the contract to build the £250m Manhattan Loft Gardens – a 42-storey luxury residential tower in Stratford.

Bouygues was appointed preferred contractor on the SOM-designed scheme in June 2014. It will house 248 flats above a 150-room hotel, with its twice-cantilevered structure supporting three sky gardens. Work began earlier this year, with completion due in spring 2018.

For the Gascoigne Estate project, Bouygues saw off competition from Ardmore, Mulalley and Higgins, Building understands.

The project, designed by Levitt Bernstein and Allies and Morrison, is being developed in partnership with the East Thames housing association and is scheduled for completion by 2024. It will eventually see 1,575 homes built on the eastern side of the estate as part of the Estate Renewal Programme.

Spokespersons for East Thames and Barking and Dagenham council said they were “not yet in a position to announce the successful tender.”

France-based Bouygues has been expanding into the UK residential market for a number of years.