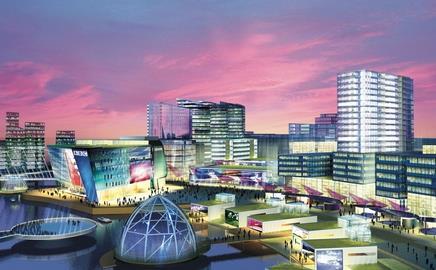 Bovis Lend Lease is set to be appointed on the £400m MediaCity:UK development at Salford Quays in Manchester, which will be home to the BBC.

Bovis is expected to announce next week that it has been appointed on the first phase of the scheme, for developer Peel Holdings.

Bovis is likely to take on a construction management role on the scheme, rather than design and build, after chief executive Murray Coleman said earlier this year that the company would be pursuing lower-risk CM jobs.

This followed losses at Bridgewater Place in Leeds and problems on its PFI hospital project in Manchester.

The project is high profile, largely because it is part of the BBC’s plan to save money by relocating some staff from London to Salford.

Bovis, which declined to comment, is already working on the redevelopment of the BBC’s Broadcasting House in London and built the Trafford Centre in Manchester for Peel.

Wilkinson Eyre was originally commissioned to design three buildings for the BBC in Salford, but architect Chapman Taylor has been appointed to take on the project after detailed design stage.

Chapman Taylor is also developing designs for a residential scheme above a studio block facing the BBC buildings, a hotel and a multi-storey car park.

Gleeds is cost manager on phase one of Media:City. The 200-acre scheme will be the UK’s first purpose-built media city.