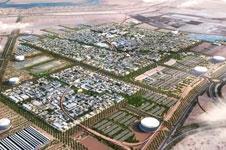 British architects Grimshaw and Hopkins have been asked to design buildings in the Masdar eco-city in Abu Dhabi.

The two are among a host of British architects understood to have been approached by Masdar’s development team with a view to designing signature buildings for the ambitious $22bn (£14.6bn) project.

Foster + Partners is the masterplan architect on the 6 sq km Masdar development, and is designing several of the buildings itself.

But the developers are keen to have a diverse spread of designs, and are tapping up British architects to help them do it.

A source said: “There are lots of British guys involved in Masdar, and they’re keen to get architects they know and respect to work on it.”

Masdar’s backers intend for it to be a centre for universities, research laboratories, and environmental consultants to create innovation in green technology. Gerard Evenden, head of Foster + Partners’ Abu Dhabi office, has called it the “silicon valley of sustainability.”

The news comes in the same week the UKT&I held a “partnership seminar” with Masdar for construction industry representatives to find out about opportunities on the project.