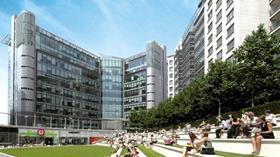 British Land has increased its development pipeline, particularly in London, after the acquisition of major development opportunities in Paddington and Shoreditch.

The developer said in a trading update this morning that its pipeline of projects set to start on site within 18 months had increased by £250m to £784m.

The additional projects are mainly focused on London offices and the near-term pipeline now stands at 1.4 million sq ft.

British Land bought a majority stake in Paddington Central in July and was selected by the City of London to work up plans for 22 buildings in Shoreditch in May.