McLaren to start work by autumn

British Land is pressing on with its first build-to-rent-led scheme on the City fringe, more than three years after the job was put on hold.

The developer said phase two of the 136,000 sq ft Aldgate Place mixed-use scheme would start by the autumn. 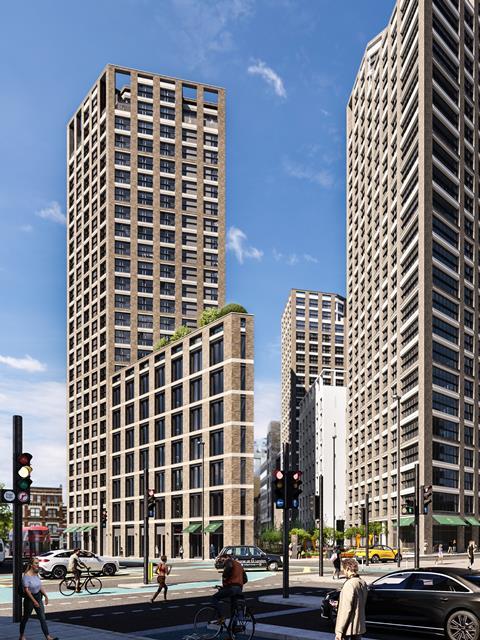 The scheme will be British Land’s first BTR development

The first phase of the project, which was completed in 2017, was developed in joint venture with Barratt, but British Land acquired the Barratt share of the JV in June 2019 giving it control over phase two and residual ownerships in phase one, including retail units and car parking.

Phase one of the scheme, which was designed by Allies and Morrison, is made up of 304 apartments and a 160-bedroom hotel.

McLaren will start work on the mothballed second phase and will include 159 build-to-rent apartments, 19,000 sq ft of office space and 8,000 sq ft of retail and leisure space.

Work includes upgrading the public realm with increased biodiversity and a focus on health and wellbeing.

>> In Business: McLaren on right track for record turnover

The project is adjacent to Aldgate East and located halfway between Crossrail stations at Liverpool Street and Whitechapel.

Aldgate Place will also be a net zero carbon development with embodied carbon of around 620kg CO2e per sq m.

Simon Carter, chief executive at British Land, said: “We are excited to commit to phase two at Aldgate Place, our first build-to-rent development which will be an exceptional building in a thriving part of the City.”

In addition to the apartments being developed at Aldgate Place, British Land will also build between 2,000 and 4,000 homes as part of the flexible planning consent secured at Canada Water, its fourth London campus.

British Land has also committed to developing 1 Broadgate, with work set to be carried out by Sir Robert McAlpine, while Skanska is on site with the Norton Folgate mixed-use scheme at the northern end of Bishopsgate.