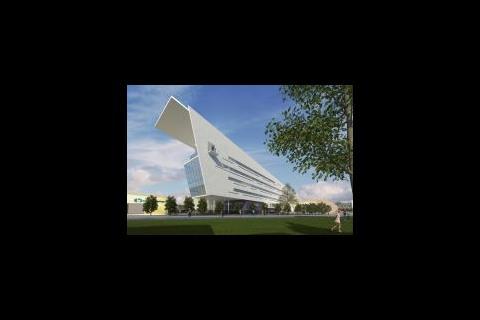 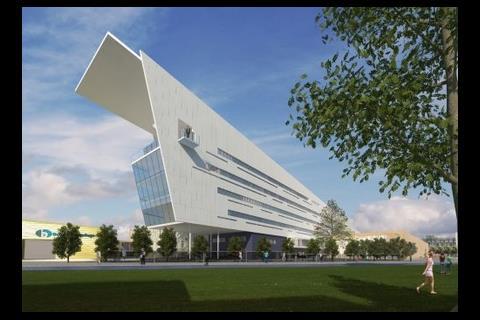 Architect Broadway Malyan has applied for planning approval for its detail design for a £84m new campus for Bournville College on the site of the former MG Rover works at Longbridge, Warwickshire.

The scheme, which is part of developer St Mowden's £750m plans for the former car works site, will unite the college's three campuses in one site, serving 15,000 further and higher education students and adult learners.

Leading the project from Broadway Malyan's Birmingham office, Salim Hussain said: “The new Bournville College marks one of the first phases of the biggest regeneration scheme in the region, so it is incredibly rewarding to have the opportunity to implement the concept design through the build stage.”

The six-storey building will be located on Longbridge North and is intended to create a new town centre at the heart of the regenerated 190ha site.

The new Bournville College will be housed in one building, comprising multiple distinct blocks interlinked around the central spine structure with a double-height atrium. A glazed tower will overlook the nearby River Rea, running overground for the first time since early last century.

The college will provide public access to a sports hall, restaurant and hair and beauty salons on site. It has been designed to achieve a BREEAM 'Excellent' rating and sustainability features include rainwater harvesting, earth tubes and an exposed concrete frame for improved thermal mass.

St Modwen’s £750m Longbridge scheme is one of the largest regeneration projects in the West Midlands. The plan includes the creation of 10,000 new jobs and 1,980 new homes alongside public realm and access to transport links.

Norman Cave, principal of Bournville College, believes the design of the building to be integral to the long-term success of the facility.

He said: “The brief was to create a landmark building that represented the vision for Longbridge as well as providing an educational facility that could meet the needs of businesses, local community, adults and young learners.

“Fundamental to this was the creation of an effective working partnership where design ideas could meet the aspirations of the college. We believe that our partnership has done just that and we look forward to providing a 21st-century educational facility to an area of the city which has been severely affected by the demise of MG Rover.”

The MG Rover car works closed in 2005 with the loss over 6,000 jobs, although a Chinese firm, the Nanjing Automobile Corporation, maintains a small workforce on site to build MG sports cars.