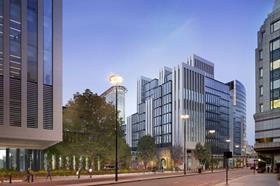 Brookfield has taken on a key development site in the City of London that was dropped by developer Hammerson earlier this month for being insufficiently profitable.

The US-listed office giant Brookfield Office Properties has exercised an option to take on the St Alphage development site on London Wall from the City of London.

The site was previously called London Wall Place under a previous development option the City of London had with Hammerson, which comprised a Make Architects’ 500,000 sq ft office scheme.

As Building revealed earlier this month, the London Wall Place project – which has planning permission – was dropped by Hammerson because it was not viewed as sufficiently profitable.

That move came as Brookfield agreed a deal with Hammerson to buy £520m of its London office assets, including 99 Bishopsgate and the Principal Place development site.

But the two-building project London Wall Place project was not included in the deal.

The City of London, which appointed Jones Lang LaSalle to market the scheme, has now said Brookfield had taken on the option to develop the site.