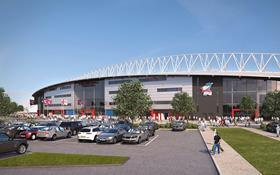 The contractor, who specialises in sport related buildings, is expected to complete the 12,000 capacity all-seater stadium (pictured) in time for the start of the 2016/17 football season.

The overall development will also include a 100-bed hotel, multi-use indoor arena and community sports pitches.

Buckingham Group, who is based near the Silverstone race circuit, has extensive experience in building sports facilities, with high profile contracts including the Silverstone Wing at the race track, the Copper Box arena (which hosted handball at the 2012 Olympics), as well as stadia for football clubs Brighton and Hove Albion and Milton Keynes Dons.

Peter Swann, chairman of Scunthorpe United, said: “We are delighted to have appointed Buckingham Group Contracting to build our new stadium.

“The group has a fantastic track record of working on and delivering major stadium developments and the appointment means that we have our team in place and are now ready to begin construction of our new home.

“We cannot wait to get started on work to deliver something really special for our fans and for the community.”