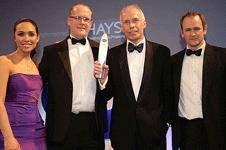 More than 1,300 construction professionals gathered at Grosvenor House Hotel to reward best practice, innovation and excellence in the building and construction industry at the 2009 Building Awards, which celebrated its 15th anniversary.

Davis Langdon has assumed its habitual position on the winner's rostrum, despite stiff competition, particularly from Turner & Townsend.

Sponsored by Hays Construction & Property, the Construction Consultant or Surveyor of the Year category was open to all sizes of multidisciplinary practices and all types of construction consultant including building and QSs. The judges were looking for evidence of success in 2008.

Davis Langdon
Well folks, Davis Langdon has done it again. Last year's winner has regained its title for the fourth - yes, fourth - consecutive year, thanks to its performance in just about any area you care to name, from education projects such as a new library for Corpus Christi college in Cambridge to large infrastructure schemes such as the modernisation of Heathrow Terminal 3.

As one of the judges remarked: “It's amazingly hard to be that consistent.” A fine financial performance has been underpinned by the launch of a new grand strategy called One Firm One Future, which has reorganised the firm around particular market sectors. As an example of what the firm is capable of, consider the Liverpool One project, where DL provided cost management for a scheme to regenerate 42 acres.

At its peak, the firm was able to supply 30 QSs and at the end it cut the price by 20% for infrastructure investment. And in as much as firms have personalities, DL has a pleasant one. As one judge remarked: “It's been very supportive of other consultants abroad, which is a sign of maturity.”

Turner & Townsend
This consultant's performance over the past year has been remarkable: its fee income has risen 22% and its operating profit by 23%. But what really impressed the judges was its imaginative approach to reducing the environmental impact of its projects.

This included an integrated strategy for carbon reduction at the outset of all projects, the use of offices as energy sources, its tools for water and waste management and the creation of a bespoke database to assess which solutions deliver the best results. Also impressive was the firm's emphasis on social responsibility: its staff donated £200,000 and thousands of hours of their time to good causes.

Cyril Sweett
Cyril Sweett's approach to staff development is nothing short of outstanding. Its workforce is trained across all specialisms and most of its professionals can now carry out BREEAM, Eco-homes or Code for Sustainable Homes assessments. Equally importantly, risk management training was given to all the appropriate people. And has it worked?

Yes, according to Ed Badke, the RICS' director for construction, who says: “The Cyril Sweett team has made an impressive step to lead the market by addressing the real cost of sustainable construction. Their work encourages project teams to have the confidence to adopt a sustainable agenda.”

Faithful + Gould
This cost consultant has reacted to the pressure of the downturn with a mixture of pragmatic and ambitious measures. The opening of an insolvency support service is an example of the former, and the founding of a virtual university, with classroom courses at all levels, to share knowledge across the firm's global network is a fairly spectacular example of the latter. It has also instituted the position of head of commercial research to improve the way the firm collates and uses all the information held collectively, and in the heads of staff.

Franklin + Andrews
When a firm's operating profit jumps by a third in a year, you might have some shrewd suspicions that it's doing something right. In Franklin + Andrews' case this is partly down to expert sector teams that have won long-term deals with clients such as Nokia Siemens and Transport for London, and partly to a streamlined management system that can measure the firm's true performance in real time.

Rider Levett Bucknall
RLB is a truly global business. Last year it opened offices in China and the Middle East, completed work on the Beijing Olympics and won work on London 2012. If that weren't enough, it opened an office in the Caribbean and launched its European Alliance. Naturally, it takes superb management to handle an empire this size, but luckily RLB's staff are in good hands: last year their employer was placed second in The Guardian's Top Employers rankings.

Tuffin Ferraby Taylor
A recent interview in Building looked at what would happen to TFT after David Tuffin, its charismatic founder, took his foot off the pedal after 30 years or so in the driving seat. Well, looking at the firm's performance in 2008, the outlook is pretty bright, even in these dark times. The public sector teams are winning new clients, particularly in the vital area of education, and plans are in hand to open an expert witness department.