A building control body continued allowing the use of combustible Kingspan insulation on tall buildings despite describing its certificate as “garbage”.

Wednesday’s hearing of the Grenfell Inquiry was shown a series of emails between staff at the National House Building Council (NHBC) about Kingspan’s K15 insulation in the years leading up to the 2017 fire. 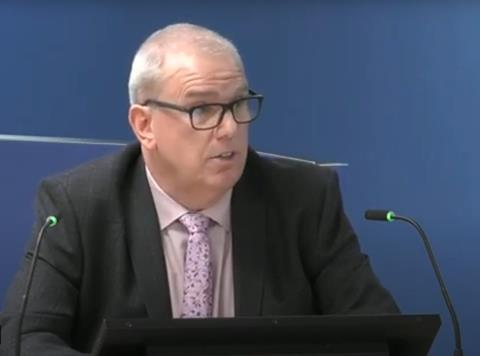 The product had been given a certificate by the Local Authority Building Control, another building control body, which said it was a “material of limited combustibility” and suitable for use in buildings above 18m.

In one November 2014 email, NHBC surveyor John Lewis said the certificate was “all garbage. Hertford LABC didn’t know what they were talking about.”

He continued: “Kingspan have since done at least two tests (I suspect they’ve done more but have kept the results close to their chests because they performed so badly!) using a steel frame and a ventilated cavity and there is an issue with ongoing burning.

“Once the fire source is extinguished, the insulation continues to burn up the cavity and, in one case, continued over the cavity barrier and to the top of the test rig.

So, it ’s not clear why the LABC detail states that it’s a [material of limited combustibility] when it clearly isn’t.”

The NHBC was aware by this time of tests on K15 which had shown the product continuing to burn for 20 minutes after the laboratory flame was taken away.

The inquiry has also already heard how one test had turned the rig into a “raging inferno” that had to be extinguished because of fears it would damage the testing hall.

Lewis added in the email: ”It’s all an accident waiting to happen and we’re meeting with all the [plastic insulation] manufacturers to try and get something sorted.

“But, in the meantime, they continue to state that it’s fine and most [building control bodies] accept that at face value without sifting through the details.”

Lewis had been responding to a surveyor at a different firm who had asked whether the LABC certificate was valid.

Two weeks earlier, NHBC head of technical operations Steve Evans had emailed Arup fire consultant Barbara Lane about the certificate and asking if she would be interested in meeting.

Lane, who has appeared several times at the inquiry as an expert witness, replied within half an hour to the email.

She said: ”Arup are actually deeply concerned about the lack of understanding of assemblies and the ongoing incorrect use of test reports for individual materials being applied to more complex building envelope forms.

”The use of highly combustible materials in residential buildings is now simply an accident waiting to happen.”

Lewis had been copied into the correspondence, which the inquiry heard is why he had used the same phrase “accident waiting to happen” in his later email.

Inquiry counsel Richard Millett QC asked Evans: “Did Barbara Lane’s timely response indicating to you that she believed that this was an accident waiting to happen concern you at all?”

Evans replied: “I wouldn’t say ”concern” is the word. It again assured me that we were going to be able to move forward and meet with Arups, and they had, you know, concerns about the product.”

Asked by Millett if he thought Lane had been “exaggerating” or if her warning should be taken seriously, Evans replied: “At this point, I hadn’t met Barbara Lane, so I couldn’t tell if she was exaggerating or what. I didn’t know if this was terminology she used on a daily basis or what. So I couldn’t pass a comment on that.”

He added: “I took this whole issue seriously, that’s why I’d spent most of the previous 10 months trying to work with industry to find a solution.”

Millett then asked if the NHBC had continued allowing the use of K15 on high rise buildings because it would have been “bad for business to suddenly stop approving” the product and would have “caused an upheaval and a barrage of enquiries”.

Evans replied: “We wanted to avoid confusion in the industry, and we wanted to work with industry to resolve that confusion.

“It was not done to protect market share, it was not done with any other reason than to allow industry to give us the information so we could make an informed decision.”