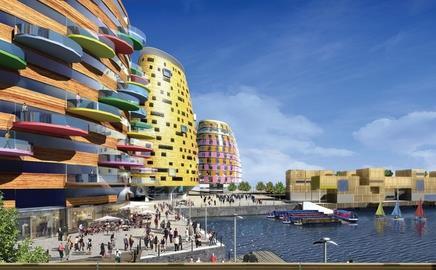 The design watchdog has raised questions over the sustainability and design of BioRegional Quintain’s £200m zero-carbon scheme in Middlehaven, Middlesbrough, calling it bold but in need of significant alterations.

In a letter sent to planning authorities at Middlesbrough council Cabe said it welcomed zero-carbon developments in principle, but questioned the developer’s approach to this 40-acre mixed-use scheme.

It said: “It is curious that the approach to sustainability does not appear to be manifest in the masterplan. We wonder if greater environmental and social sustainability could be achieved through masterplanning?”

The comments will come as a blow to BioRegional Quintain, a joint venture between developer Quintain Estates and environmental consultant BioRegional, which is trying to place itself at the forefront of green development.

The review said the buildings at the centre of the site needed considerable attention to make them work architecturally and in the public realm.

In conclusion, it said: “We take comfort from the involvement of a large-scale developer in this project, but would remind those involved that the unorthodox masterplan generates risks that will require attentive planning control.”