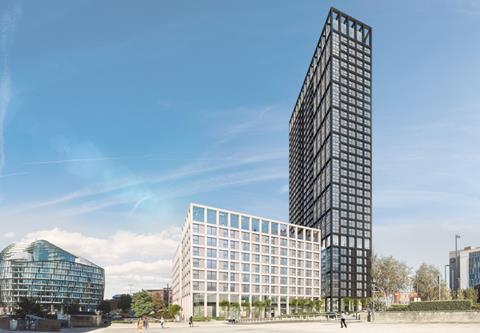 Caddick has drafted in its construction arm to take over from Carillion on a £154m residential scheme in Manchester, two weeks after work stopped at the site following the contractor’s collapse.

The 466-unit build to rent scheme known as Angel Gardens is being delivered by Moda – a partnership between Caddick Developments and Generate Land – and its funding partner Apache Capital.

Caddick, which is taking a construction management role on the project, will take on Carillion’s 30-strong subcontractor supply chain at the site to finish the job, as well as directly hiring 20 former Carillion employees.

Carillion started work on the 55-storey scheme, designed by Ryder Architecture in the heart of the city’s regeneration scheme NOMA, in January 2017.

Moda and Apache Capital said there would be “no material impact on the project’s cost or timeframe of delivery” and it is still expected to complete at the end of the year.

“We are very disappointed by the Carillion collapse but we have been able to get the job back on track fast and keep the sub-contractors going with minimal disruption,” said Tony Brooks, managing director at Moda.

Andrew Parker, director of projects at Moda, added: “We have had contingency plans in place for some time and wanted to prioritise saving jobs, as we hugely appreciate the critical role played by the main subcontractors and small businesses that support major projects. We have always remained close to the key subcontractors and suppliers throughout the process and this has proved to be an essential part of the solution to keeping Angel Gardens on track.”

Last week, developer Quintain revealed that it had ditched talks with Carillion in July last year over a £130m contract to build 553 new homes at one of the plots at its 85-acre Wembley Park scheme after the contractor posted its first profit warning, handing the contract to McAleer & Rushe instead.

Helical Bar’s mixed-use scheme near Smithfield market is also back on site after the developer brought in Mace and McLaren to continue Carillion’s work.