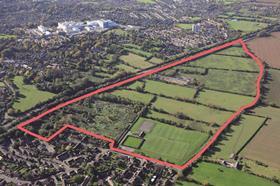 Eric Pickles yesterday said that the application should be granted upon appeal, following a recommendation for approval by the planning inspector.

The decision is despite the fact that the application is the same as that originally refused by Pickles a year ago in the face of a recommendation for approval by the planning inspector, on the basis that approving it would undermine the local council’s attempts to develop a new core strategy.

Cala won a judicial review into that decision, which the government lost in February this year.

The scheme, which was originally being pushed by Cala in the teeth of opposition from Winchester council, now has the support of the local authority.

Pickles aid the appeal should be approved because there is “no other credible alternative housing option to meet the need for housing in this part of the district”.

This latest appeal follows a raft of earlier planning disputes between Cala and Pickles over the scheme, including in 2010 when the firm took Pickles to court for unlawfully attempting to abolish regional spatial strategies without an act of parliament.

Ian Ginbey, head of planning at Clyde & Co, which acts for Cala, said: “Plainly, Cala is delighted that the secretary of state has now granted planning permission for its proposals at Barton Farm, following the quashing of his previous refusal.

“Winchester is unable to demonstrate a five year housing land supply and this scheme delivers a sustainable urban extension including 800 affordable homes.”