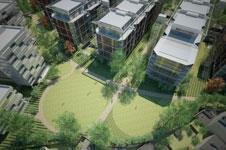 The Candy brothers have sold their stake in the Chelsea Barracks residential project to co-funders Qatari Diar.

However, the brothers' Candy & Candy arm will still carry out development, planning and marketing of the central London scheme.

CPC Group and Qatari Diar bought Chelsea Barracks from the UK government in January for a record £959m. It is not known how much Qatari Diar has paid CPC Group for its stake on the project.

In a statement, Qatari Diar scotched rumours that the equity partners had fallen out over the scheme, which they referred to by its official name, “Project Blue”.

It said: “The intended equity transaction relating to Project Blue and the consequent increase in our involvement in the redevelopment of the Chelsea Barracks site are expressions of our deep commitment to the UK real estate market, and should not be interpreted as dissatisfaction with our business relationships on the project.”

Candy & Candy announced last week that it had made significant design changes to the affordable housing and open space elements of the 5.2ha scheme following an extensive consultation with stakeholders.

The deal with Qatari Diar is the second significant shifting of business for the Candy brothers in recent weeks. CPC Group sold its equity and shares in its NoHo Square development to Icelandic bank Kaupthing last month in exchange for full ownership of the 9900 Wilshire project in Beverly Hills.