Proceeds from strategic sale will go towards reducing debt 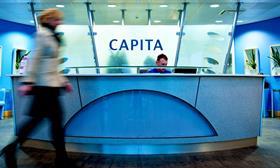 Shares in support services group Capita edged up today after it announced the sale of Supplier Assessment Services to private equity group Warburg Pincus for £160m.

Capita said net proceeds from the sale would be used to paying down its debt, three and half years after buying the business. At the end of last year Capita’s net debt stood at £1.1bn.

In January this year, Capita issued a profit warning and later launched a £700m rights issue to help fund a strategic revamp.

In April, the group reported a loss last year of £513m on turnover of £4.2bn, but the firm denied it was heading in the same direction as failed contractor Carillion.

Capita chief executive Jon Lewis said of today’s sale: “This transaction marks a further step in executing the strategy announced in April aimed at simplifying and strengthening the business to deliver future success and contributing to realising £300m from non-core disposals in 2018.”