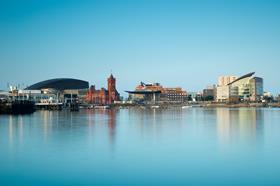 Cardiff city council has kick-started its search for a developer to build and operate a £150m arena in the Welsh capital.

The new arena will be built at Cardiff Bay (pictured) but the local authority has said more than one public site is in contention to become the home of the new 15,000-capacity music and events space.

One option could see The Red Dragon Centre, a leisure and entertainment hub, demolished and rebuilt elsewhere to free up land opposite Cardiff Bay station.

The chosen developer for the scheme will be handed a lease of between 99-199 years for the council land, with the firm, or a consortium member, expected to operate the building for 45 years.

The scheme will also involve building a new hotel, access road and public realm around the arena.

The council estimates the work will be worth around £150m and is willing to pay the developer up to £30m in funding or provide cash through an income strip lease arrangement over a 45-year period.

The deadline for applying to tender for the work is 20 September.

The top three highest-scoring applicants will then be invited to tender, with planning consent expected to be achieved in 2020 and the new arena potentially opening by 2024.