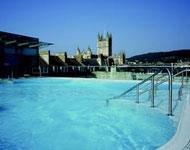 Carillion and architect Grimshaw have been sued by Bath council over Bath Spa, the troubled leisure centre that opened five years late and went three times over budget.

The construction firm had previously issued a writ against Bath and North East Somerset council for £2.4m over the ill-fated project.

But the council has struck back, naming Carillion and its architect Grimshaw in a £21m writ claiming that “significant costs” had been incurred by “design and/or workmanship issues for which Carillion and/or Nicholas Grimshaw & Partners are responsible”.

Much of the building work on the £45m spa was carried out by Mowlem, which was acquired by Carillion in 2007. Mowlem departed from the project in 2005 and was replaced by Capita Symonds.

Bath Spa was originally supposed to have been completed in 2001 for a budget of £13m, but a litany of defects and various disputes between contractor, architect and the council meant it eventually opened in August 2006 at a total cost of £45m.

Now, the project’s squabbling seems set to continue in the courtroom. Bath and North East Somerset council and Mowlem settled the first dispute out of court in 2006, but Carillion clearly thought it had a case to pursue as it filed a writ in August this year. Today, it has emerged that the council has counter-sued.

In a statement, the council said: "Prior to the issue of the writ by Carillion, the council had sought to resolve matters constructively without recourse to the courts. The council's position is that significant costs which it incurred in relation to the Bath Spa are the result of design and/or workmanship issues for which Carillion and/or NGP [Nicholas Grimshaw and Partners] are responsible."

Neither Carillion nor Grimshaw wished to comment on the council’s action.