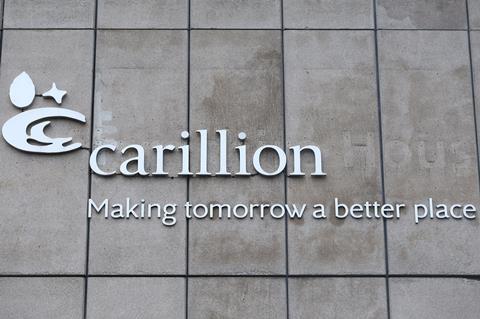 Perhaps now Project Bank Accounts will become mandatory? So much supply chain distress could have been avoided.

HMG has big questions to answer. Why were they awarding contracts to Carillion after the exposure of its problems in July? What contingency planning did they do for the collapse? 20,000 jobs & huge projects at stake! More Brexit-induced Whitehall paralysis & incompetence. https://t.co/dYZ4XUUWgn

The demise of #Carillion is a sad event for UK construction - and it exposes huge issues in govt's relationship with the sector... not b/c of the lack of a bailout, but b/c of events that led to the collapse (cont)

All the focus will be on Carillion but the bigger issue is for their smaller sub-contractors. 86% of construction employment is in small & medium size firms, which are more reliant on cash flow & won't get bailed out by government.#Carillion #construction #ukconstruction pic.twitter.com/RxpykD39cf

Totally agree and a flawed #publicsector #procurement process has exacerbated the risk(s) to many within and external to the company, including the UK #taxpayer

The very best of luck to PWC working to save as much as they can from the Carillion failure. The choice of going down a liquidation path is an interesting factor for restructuring experts but the main concern is employees jobs and the safe operation of the government contracts.

Private provision of public services is not over, with Carillion collapse, but it’s well past its peak - as this government statement on Carillion makes crystal clear pic.twitter.com/XRVJCVhmim

2013 was when they brought in the 120 days. They should have been taken apart at the time, but no one was listening to the subcontractors, who then had to furnish the debt themselves if they wanted to have the work

What we see in the #Carillion collapse is the lethal combination of privatisation and limited liability. The shareholders take the profits - in spades - but pick up neither the debts nor the risk of collapsing services.

This is not unusual so #Carillion collapse should provoke a much wider examination of #Procurement process in #construction & #supportservices #facman as well #management #leadership priorities https://t.co/HeqZMre6RR

2016 Carillion annual report says dividend ‘has increased in each of 16 years since formation of company’; Is this really acceptable alongside a pension fund deficit over half a billion pounds?

Looking at Carillion's 2016 report and accounts, it's clear that the company was already in trouble then. Look at the rise in current liabilities. Trade payables increase indicates Carillion was squeezing suppliers to limit short term borrowing. (cc @SuButcher) pic.twitter.com/unxNrnl82N