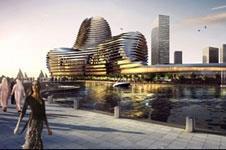 A Carillion joint venture has been selected to deliver major construction contracts in the UAE worth approximately £600m.

Prime minister Gordon Brown and the secretary of state for business, enterprise and regulatory reform, Lord Mandelson, confirmed the selection of Al Futtaim Carillion to deliver the projects in Abu Dhabi and Dubai, during a visit to the UAE.

In Abu Dhabi, an agreement was signed by Al Futtaim Carillion for a £500m contract to build the Al Muneera phase of Aldar’s £10bn Al Raha Beach development.

The JV has won a £500m contract to build the Al Muneera phase of Aldar’s Al Raha Beach
The contract, which is due for completion in April 2011, will involve construction of a 14-story office building, eight 14-story apartment buildings, 148 town houses and 11 luxury villas facing the development’s canal and waterfront.

Mandelson said: “The UK and the Gulf have a long-established business relationship. In the current climate it is even more important than ever that we seize every opportunity for long-term economic growth.”