Carillion turnaround will take up to five years

Misery continues for troubled contractor, which today announced a further £200m in provisions, another profits warning, and a corporate revamp 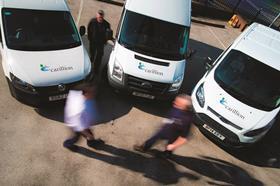 Carillion has earmarked another £200m-worth of provisions to the £845m it announced in July, issued its second profits warning in a matter of months, and admitted it will take between three to five years to turn the business around.

Since July, when it revealed an £845m hit on a number of construction contracts, the troubled contractor has seen its shares collapse, a boardroom shake-up that has resulted in its chief executive and finance chief resigning, and been booted off the FTSE 100 share index.

Today it revealed a further £200m provision relating to a number of support services contracts, although it said this would have a “minimal impact on cash”. Carillion also said it would be recognising a £134m impairment charge relating to its UK and Canadian construction operations.

Shares in the firm fell 12% in early trading today to 57p, after mounting a moderate rally earlier in the week following reports of a possible takeover bid.

In a statement covering its interim results – an announcement which had been delayed by a number of weeks – Carillion said turnover for the six months to the end of June had been flat at £2.5bn, while underlying operating profit fell by 27% to £88m and underlying pre-tax profit fell 41% to £50m.

Taking into account £1.2bn-worth of provisions and restructuring costs, the group posted a first-half pre-tax loss of £1.15bn.

It also warned that total revenue for the year was expected to be between £4.6bn and £4.8bn, versus previous forecasts of between £4.8bn to £5bn.

Net debt at the end of the first half nearly doubled to £571m, with average net debt throughout the period of £694m. Full year net debt is expected to be between £825m and £850m.

Carillion also revealed it had agreed an additional £140m in new bank facilities, although City analysts said while this gave the firm some breathing space, perhaps to the middle of next year, overall its balance sheet still looked in trouble.

The group’s strategic review, which kicked off in the summer, has earmarked a further £70m to £100m of restructuring costs in the second half.

Carillion said the review process had enabled the new leadership team “to fully understand the group’s challenges, and to identify a route map to significantly improving the balance sheet, risk profile and performance of the business”.

“A number of actions are being undertaken urgently to address liquidity and rebuild the balance sheet, with which progress to date is positive,” it added.

But it warned that it would be at least until 2020, possibly 2022, before the business was “transformed”.

From the beginning of next month the group is to be restructured into four core UK divisions: infrastructure; central government; corporate and regions, and building. There will also be an international operation, it said, focusing on its Middle East activities.

The findings of the strategic review, conducted by consultants EY, will see a new group executive lead the group from the start of October, comprising of a chief executive, a chief financial officer, chief operating officer, chief transformation officer, legal director and company secretary and chief human resources officer.

Carillion said the new model would creat “shorter, direct lines of authority, with increased transparency and line-of-sight accountability. In addition, reward will be aligned to performance”.

It said the new structure would enable significant cost reduction. Carillion’s current total addressable overhead is £336m, of which £267m is in the UK, “which as a percentage of revenue greatly exceeds industry benchmarks provided by EY”, it said.

“The new operating model will generate savings through removal of layers and duplication of management, optimisation of contract delivery and reporting systems, increased professionalisation and efficiency of shared services. There are also significant opportunities to reduce third-party and discretionary expenditure,” it added.

The business needed a “stronger commercial aptitude, better line-of-sight accountability and an overhead structure that the business can afford, in order to create a lower risk, higher-quality business that generates sustainable cash-backed earnings”, it said, although it claimed “a good start has been made”.

As part of efforts to focus the business, Carillion said talks were underway regarding the sale of its Canadian operation, which last year turned over nearly £600m, and UK healthcare arm, deals it hoped would raise £300m by the end of next year.

Describing the interim numbers as “disappointing”, interim chief executive Keith Cochrane said he was confident the business “could change”.

In a statement he added: “The strategic review that we launched in July has enabled us to get a firm handle on the group’s problems and we have implemented a clear plan to address them.

“In the immediate short term, our focus is to complete the disposal programme, accelerate our action to take cost out of the business and get our balance sheet back to a place where it can support Carillion going forward.

“No one is in any doubt of the challenge that lies ahead. We have made an encouraging start and the ambition is there to build on that progress.”

Carillion is still deep in trouble.

There are no answers yet to the big unknowns, namely:

1. How do you bridge the widening necessary debt reduction to achieve required financing ratios, of around £400m plus without equity? It looks like the new facility gives an extra six months of breathing space, to mid-2018. But the balance sheet is arguably in a worse mess than in July

2. Who is the man to lead Carillion’s recovery? Is a re-financing with new equity (including potential debt to equity) possible without that chief executive role in place?

3. How attractive will a significantly down-sized Carillion be? It seems to be saying it will be aiming for ongoing revenue of not much over £3bn

4. Is there really a positive discussion with the pension trustees which can wipe off £200m from the near £600m deficit?