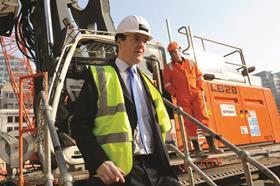 Civil engineering contractors have told the chancellor he must find funding to pay for “shovel ready” repair and maintenance projects to lift the civil construction sector out of recession.

The Civil Engineering Contractors Association (CECA) has written to George Osborne with a series of demands to meet the needs of the sector after its workload trends survey showed a second consecutive quarter of decline.

The survey also found that in Q3 20% more firms said their civils order books had declined compared with those who said they had increased. The survey found that motorway work and local roads worst hit.

In a letter to the chancellor Alasdair Reisner, director of external affairs at CECA, said there were “thousands of smaller scale local projects that have the potential to provide a boost to the economy if they are allowed to proceed”.

He said: “If these projects are to fulfil their potential, local authorities must identify the infrastructure priorities in their areas, and be provided with the tools to work with the private sector to unlock each project, moving them swiftly towards implementation.”

CECA said that as well as funding shovel ready projects the government needed to develop a long term investment plan with the support of other political parties; re-balance infrastructure investment across the UK; and ensure appropriate funding models were in place to fund development going forward.

CECA’s call came as the latest figures from the Office for National Statistics showed construction output fell 2.6% in the third quarter of this year, compared to the previous quarter, a marginal downward revision on the previous estimate of a decline of 2.5%. It is the fifth straight quarter of falling output.

Construction economist Brian Green said the figures showed the industry has been shrinking by “about a billion pounds a month for the past six months, or roughly 1% a month”.