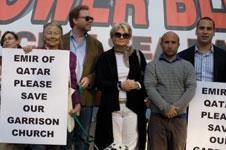 The Chelsea Barracks Action Group, the band of local residents who campaigned to have Richard Rogers dropped from the Chelsea Barracks scheme, has mixed feelings about the new shortlist of architects for the scheme’s masterplanning role.

The group is “very concerned” by some of the modernist architects on the list and fear they will come up with a design similar to that of Rogers’ that caused such a furore in the first instance.

Georgine Thorburn, chair of Chelsea Barracks Action Group, said: “The last modernist design was going to cut out up to 60% of some residents' natural light, which was totally unacceptable and local residents won’t settle for any design that is going to have the same negative impact.

"We are hoping that the chosen masterplanner will produce an outline design that is traditional and sympathetic to the historic context of the area, especially when it comes to the issue of height and open space.

"We would also like to see a number of traditional architects being involved in the design of individual buildings so that the development has the variety and the richness of the existing context. ”