Phase one awarded Building small project of the year in 2018

Child Graddon Lewis have been given the green light for a 20-home scheme in North Kensington on the banks of the Grand Union Canal.

The scheme for housing association Westminster Community Homes, the housing arm of Westminster city council, will be the second phase of the award-winning Victoria Wharf project. 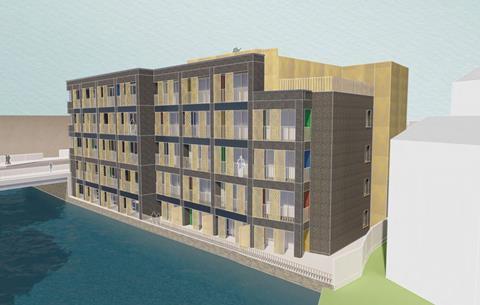 How phase two will look when completed

The scheme, which will be built directly adjacent to the first phase, will consist of a four- and five-storey block containing 19 homes. The remaining home will be located within the phase one block where it will replace an existing roof terrace.

Initially proposed as a block adjoining the phase one scheme but with a different design, phase two will now mimic the design of phase one’s dark grey brickwork and diamond-patterned cladding to form one large cohesive block.

The first phase of the scheme, which consisted of two blocks providing 22 affordable homes, was completed in 2017.

It received the award for small project of the year at the 2018 Building awards, along with the Evening Standard award for Best Affordable Development. It was also a shortlisted finalist for the Sunday Times British Homes Awards.

The architect said that the new scheme will contribute to the council’s goal of building 1,850 new affordable homes across the borough by 2023.