Lawyers for the mayor of London have urged the government to reject the controversial Tulip Tower on the grounds that the Foster & Partners scheme would exclude visiting children and community groups from using key elements of the attraction.

An educational centre within the 305m tower earmarked for a site within the City of London’s eastern cluster of skyscrapers has been put forward by developer Bury Street Properties as one of the primary public benefits of the scheme. 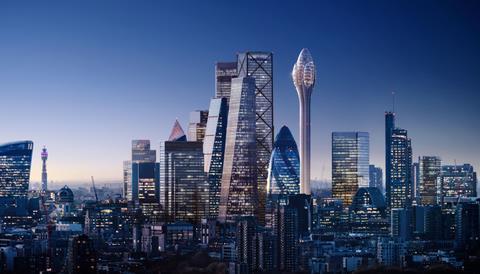 The building consists of a 12-storey viewing area at the top of a slender concrete shaft, or “stem”, rising from the plaza which surrounds the Gherkin, also designed by Foster & Partners and owned by Bury Street Properties.

Visiting school and community groups would have free access to the educational space, located on the lowest floor of the educational area, but would not have the same access to several key features of the attraction including a series of glass slides and rotating gondolas fixed to the outside of the building.

Lawyer Hereward Phillpot QC, who is representing the mayor’s office, said in his closing submission to a virtual public inquiry into the scheme that the position of the educational centre at the lowest level of usable space within the viewing platform “reflects the building’s socially stratified nature”.

He added the restriction of the attractions “most exciting elements”, the slides and the gondolas, to paying customers “would inevitably reinforce the sense that the experience of the school children and community groups is an inferior one compared to those who can afford to pay to use the areas above”.

He also said the fact that only three of the 74 schools invited to a roundtable event for beneficiaries of the scheme sent representatives showed a “marked lack of enthusiasm” for the attraction.

The comments came on the final day of the inquiry into the scheme launched by Bury Street Properties after Sadiq Khan refused the proposals last summer, overruling the City of London’s approval for the scheme given three months previously.

Historic England has also objected to the scheme, with the lawyer representing the heritage group Scott Lyness telling the inquiry in his closing submission that the tower would cause “considerable permanent harm” to views of the nearby Tower of London if built.

Lyness said the backers of the proposals had sought to “invest this building with meaning and merit that on scrutiny it does not deserve, a building which, in this location, driven by attention seeking aspirations, its inherent need for striking prominence and distinct landmark status cannot plausibly be described as causing only a small degree of detriment to the highly vulnerable setting of the tower of london, one of the world’s great historic monuments.”

He added the building’s location on the eastern edge of the City’s eastern cluster of skyscrapers, which includes the Cheesegrater and the recently completed 22 Bishopsgate, pulls the cluster “aggressively into the very area which has been identified as most vulnerable for conserving the significance of the tower.”

But lawyer for the City of London Neil Cameron QC said City planners had given “great weight” to the heritage impacts of the tower when granting its approval in April 2019, adding that the views of the City “should command respect”.

He went on to say that the “very high quality” scheme would offer “significant educational and community benefits and public realm improvements”, and would “extend an invitation to a wider range of people to enjoy the wonder of the cluster and a view over all london has to offer”.

And lawyer for Bury Street Properties Russell Harris QC defended the tower, saying it was “elegant and has a gentle gracefulness of form, which is high, exciting and exuberant of use, but which also maintains its essential architectural calmness, authority and authenticity.”

The appeal into the mayor’s decision was formally launched by billionaire financier and owner of Bury Street Properties Jacob J Safra, with the final decision set to be made by secretary of state Robert Jenrick – although no timeframe has been given for when this will be announced.