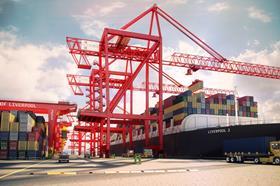 Lend Lease will build Liverpool 2, a deep-water port in Liverpool

Lend Lease jumped to the top of the contractors’ league table for September after winning a major infrastructure scheme worth £300m.

Lend Lease secured the top spot thanks to a contract to build a deep-water port in Liverpool - known as Liverpool 2 - for client Peel Ports, reported in Building last month.

Bam climbed to second place after it won a hat-trick of major schemes, including a new football academy for Manchester City football club, worth £88m; the Duke of York Academy in Dover, worth £24m; and the refurbishment of Brynmor Jones Library for the University of Hull, worth £17m. Neither Lend Lease nor Bam featured in the August top 10.

The news came as the CPA/Barbour ABI construction index rebounded slightly after four consecutive months of decline. The index, which measures contract awards and uses a January 2010 base of 100, hit 110 for September - up from 107 in August.

The result follows the latest construction output figure from the Office for National Statistics (ONS) - released last week - which showed output in August was down 11.6% on August 2011 and dipped 0.9% from July.

The ONS figures indicated the largest year-on-year falls were in new private commercial work, down 17.2%, and new public work excluding infrastructure,
down 18.6%.

Year-on-year, all areas of work declined apart from repairs and maintenance on public housing, which was up 1.6%, according to the ONS.