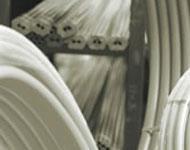 Building materials distributor BSS Group plc has reported an improved trading performance over the last financial year in a trading update for the year ending 31 March 2010.

Fourth quarter like for like sales growth is expected to be 5.1% compared to a sales decrease of 2.6% in the third quarter.

The firm’s domestic distribution services division has benefited from the both the cold snap and the boiler scrappage scheme .

Overall profit percentage for the year is expected to come in lower than last year reflecting competitive market conditions.

The group's preliminary results are to be announced on 25 May 2010.