Construction growth hit by storms, but economy still on the up

UK economy grows 0.8% in first quarter of the year, but construction posts just 0.3% growth after being hit by bad weather 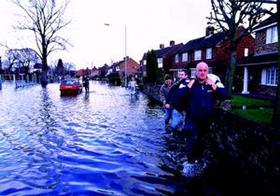 The UK economy grew 0.8% in the first quarter of the year, the latest official figures have shown, although construction underperformed with just 0.3% growth after being hit by flooding and winter storms.

The Office for National Statistics (ONS) preliminary output figures showed GDP grew 0.8% in the first three months of the year, when compared with the final quarter of 2013, which is marginally up on the 0.7% growth posted the previous quarter.

The figures showed output increased in three of the four main industrial groupings, when comparing Q1 2014 with Q4 2013, with output increasing by 0.9% in services, 0.8% in production and 0.3% in construction.

However, output decreased by 0.7% in agriculture.

The ONS said there was “some evidence to suggest construction output was affected by the storms and high rainfall in January and February”.

But it said that over the quarter, the bad winter weather did not have “a significant impact on GDP growth”.

ONS chief economist Joe Grice said: “This is the fifth consecutive quarter of steady growth.m Overall, the economy is now only 0.6% below the pre-recession peak at the beginning of 2008. In fact, services are now 2% above the pre-recession peak but the mproduction and construction sectors are still around 12% lower.”