Construction in UAE shudders back to life 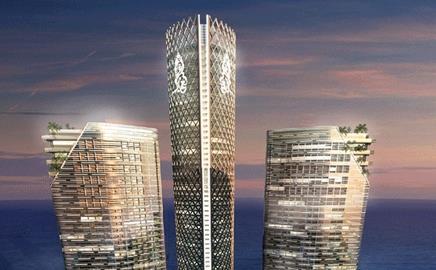 Bottom of the market called as mega projects including £1.2bn Tameer Towers return to site

Contractors have restarted work on a string of huge projects in Abu Dhabi and Dubai, as evidence builds that the market in the UAE is recovering.

Tameer Towers, a 7bn dirham (£1.2bn) 9 million ft2 mixed-use project in the Shams development on Al Rheem island in Abu Dhabi, was put under review in March, but is now going ahead again.

A 400m dirham (£68m) project to build a headquarters for the municipal government of Abu Dhabi’s western region is also back on site, having been on hold for six months.

In addition, a residential project of up to 1 million ft2 by developer Bloom Properties in Abu Dhabi, has restarted.

Duncan Swinhoe, who leads Gensler’s Middle East operation, which is involved on all three schemes, said: “Things are starting to move in Dubai and Abu Dhabi again. There are a number of projects coming out, and some tenders from as far back as nine months ago that we’d almost given up on are back on the table.”

Regarding the Tameer Towers scheme, which had 300 men on site when work was put under review, he said: “They’re now pouring concrete and the new contract price is being thrashed out.”

Tameer has dropped the alliance of three contractors it was using on the scheme – two local firms Al Habtoor Engineering and Al Rajhi Projects, and Murray & Roberts (South African) in favour of one, Al Rajhi. It said in March it was “reviewing the construction programmes and associated costs” of the scheme.

Swinhoe added that some schemes that had not started on site, but on which “all decision-making had ground to a halt”, were live again.

Meanwhile, Davis Langdon is recruiting about 15 staff in the Middle East, including in the UAE.

Steve Coates, the consultant’s head of UAE, said: “We believe we’ve hit rock bottom and now an element of liquidity is slowly coming back to Dubai.”

He said the cash was coming mainly from the $20bn (£12.5bn) bond Dubai had secured from Abu Dhabi in March, the second $10bn of which is to be released imminently, according to reports. Commentators also say the UAE has been boosted by a rise in the price of oil, which is now at $60-70 a barrel, having hit a low of $32 in December.

The UAE building boom began to falter a year ago and 566 projects in the country are on hold, according to research firm Proleads. In August, Building reported that Dubai’s main arbitration body was facing a backlog of almost £3bn of disputes.