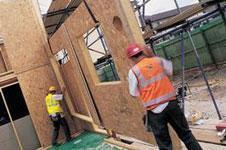 The RICS has said that the UK construction industry is in recession, after new figures revealed that private housing construction orders have fallen 20% in the last year.

Commenting on the construction market figures released today by the Office for National Statistics, RICS senior economist David Stubbs said: “These figures provide another clear signal that the construction industry is in recession.

“The on-going collapse of orders for new private homes accompanied by severe declines in orders for commercial and industrial buildings, makes it increasingly likely that the construction industry will continue to shrink throughout this year and into 2009.

“Employment levels are sure to drop further as firms react to the collapse in new business.”

Overall construction orders fell 7% for the year ended 30 June 2008, but there have been rises in public-sector housing and infrastructure orders.

Orders fell by 8% overall in the second quarter, compared with the first three months of the year.

Better news in the public housing and housing association sector saw orders in the second quarter of this year rise by 24% compared with the previous quarter.

Orders in private and public infrastructure also rose by 19% compared with the previous 12 months.