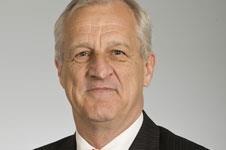 More than half a dozen construction industry figures have been honoured in the Queen’s birthday honours list.

Andrew Mitchell, the former programme director for Crossrail and current chief executive of Thames Tideway Tunnel, was awarded a CBE for services to civil engineering.

Also honoured with the title was Geoff French (pictured), the current vice president of the Institute of Civil Engineers (ICE) and former chairman of engineering consultant Scott Wilson, for services to civil engineers.

In addition, four industry figures received an OBE, including three women. Judy Lowe, deputy chair of the Construction Industry Training Board (CITB) was given the award for services to construction, particularly women in construction.

Other industry figures to be honoured included: