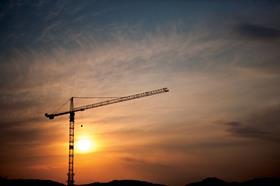 Construction output in the three months to November was down 9.8% on the same period the previous year, according to the latest government data.

This follows a 9.7% fall year-on-year for the three months to October.

The Office for National Statistics said that in the three months to November new work decreased by 11.2% year-on-year and repair and maintenance work fell by 5%.

The figures showed that for the three months to November infrastructure fell 5.3% year-on-year.

However, between June-August 2012 and September-November 2012 infrastructure grew 12.1%

The ONS also said total construction output fell 3.4% between October and November 2012. This followed a rise of 8.3% between September and October.

The only sectors to show growth when comparing the three months to November with the same period in 2011 were public housing repair and maintenance, which grew by 6.6% and private industrial , which increased by 0.2%.

David Crosthwaite, an economist for construction and property consultant AECOM, said the data was “disappointing”. “Again public sector construction fared badly with some significant declines, particularly in the public housing sector,” he said.

“However, perhaps more concerning was that the largest sector by volume of activity, private commercial construction, fell by almost 16% compared to the same period last year.

“With many forecasters now predicting that 2013 will be another difficult year for construction with little or no growth through 2013 and no positive news forecast until 2014 at the earliest, one has to ask where is the light at the end of the tunnel?”

“The sharp decline in output in the private commercial sector shows that recovery for construction may still be 12 months away.”

The Civil Engineering Contractors Association director of external affairs Alasdair Reisner said the slowdown in the infrastructure sector was “worrying news for the wider economy”.

“The government has rightly focused its recovery strategy on securing growth in the infrastructure sector. It is concerning that the general trend over the last year has been one of negative, rather than positive growth.

“CECA hopes that recent efforts to stimulate immediate activity will bear fruit, both for the sake of our members and for UK plc.

“At the same time, these figures show that there is no room for complacency if the infrastructure sector is to act as a motor to kick-start growth in the economy.”