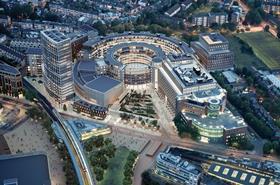 A construction worker has been seriously injured after being trapped under a lorry at developer Stanhope’s Television Centre project in White City.

The London Fire Brigade reported that they helped free a man from the back axel of a waste disposal lorry on Wood Lane after being called to the incident just before 8:30am.

London’s Air Ambulance was also at the scene and the man was taken to hospital.

A spokesperson for Stanhope said: “An incident occurred this morning at the Television Centre development site involving a vehicle and a member of the site team.

“Emergency services attended and the casualty has been taken to hospital.  The HSE will be undertaking an investigation into the incident.”

The former BBC Television Centre is being turned into homes, offices and new TV studios.