Lots to include engineering and design jobs

Consultants have been put on notice for a framework launched to develop a new £4bn metro system in Cambridgeshire.

The Cambridgeshire Autonomous Metro (CAM) is a project to build a network of metro lines throughout the county which is being spearheaded by the Cambridge and Peterborough Combined Authority. A sub-strategy for the scheme, part of the council’s Local Transport Plan, was approved by the combined authority’s board last week.

Unlike a traditional light rail system, the scheme is envisaged to use autonomous vehicles with rubber tyres and will include a series of new underground tunnels running beneath Cambridge’s medieval city centre.

Slated for completion in 2029, the metro is considered by the council as essential for improving transport links in one the UK’s fastest growing cities.

In a Prior Information Notice, the combined authority said it was looking for consultants to fill slots on a two-year framework to develop the scheme’s business case and its overarching masterplan, along with progressing the scheme into early works and “potentially delivering the project design requirements”.

Firms on the first of two lots will provide engineering, environmental and technical services and will have “creative and strategic” design responsibilities including transport planning, enabling works and demand modelling.

The second lot consists of the development of the project’s business cases and financial advice including tax advice and audit.

The framework includes the option to be extended to four years with a full contract notice scheduled to be published on 4 January next month.

In October, the combined authority launched a competition to find design consultants to produce conceptual designs for the scheme and present them to the mayor James Palmer.

The competition winner will be asked to continue working on the project until the end of 2022 in an advisory capacity from the beginning of next month. 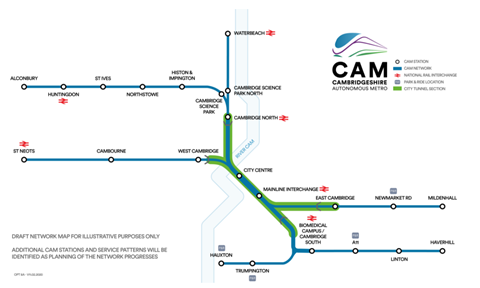