Premier League leaders Liverpool have given fans until the end of next week to comment on plans by architect KSS to increase capacity at its Anfield ground to more than 61,000.

Those contractors thought to be running the rule over the £60m deal include Sir Robert McAlpine and Laing O’Rourke, which worked on the expansion of Manchester City’s Etihad stadium.

Liverpool raised Anfield’s capacity to its current 54,000 when Carillion completed work on the £75m main stand in 2016.

The club had been given outline planning to add 4,000 seats at the Anfield Road end but Liverpool allowed this to lapse in September in favour of the larger scheme now out to consultation.

A second public consultation will be launched early next year once KSS, the architect behind the main stand, has drawn up detailed designs.

The last time Liverpool hosted a home gate of more than 60,000 was more than six decades ago when it played Wolverhampton Wanderers for an FA Cup game in February 1952. 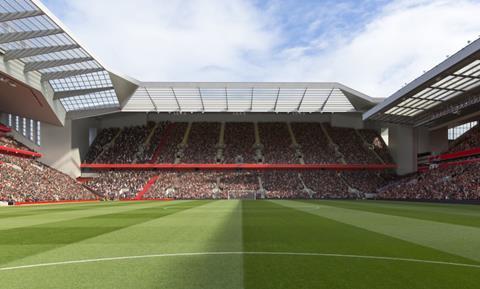 The new stand will raise Liverpool’s capacity to more than 60,000