The cost of a new prison being built by Lendlease in Leicestershire has ballooned by £116m, according to the government.

The Ministry of Justice (MoJ) has confirmed that Glen Parva prison, which originally had a budget of £170m, would now cost £286m to build - an increase of nearly 70%.

Located in a southern suburb of Leicester, the new prison is set to replace the original Glen Parva prison which was closed in 2017 and demolished after the deaths of several inmates.

An MoJ spokesperson said that the price hike was being blamed on inflation and “extra groundworks”. 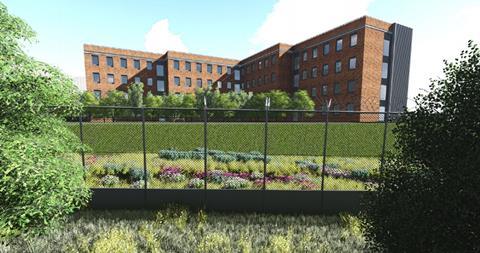 How the new Glen Parva prison will look when built

Interserve were appointed as the main contractor under a PFI deal for the scheme, which was announced in December 2016, with Lendlease taking over the reigns in 2019 after a government rejig.

Although a report by Ramboll found that there was no significant risk of flooding to the site, it warned that there were potential contamination risks from local diesel storage areas and widespread use of asbestos within the original prison’s buildings.

A number of changes to the prison’s design were made in a revised planning application in 2018, including changes of location for a car park and an energy centre, and an extra residential unit on the site.