Race for Ebury Bridge job to begin next month 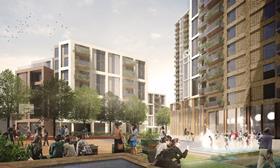 Westminster city council is looking for a firm to build a £350m housing development in the shadow of the upmarket residential job being built by Mace and Multiplex at Chelsea Barracks.

Work involves redeveloping the Ebury Bridge Estate on the Ebury Bridge Road under a masterplan drawn up by HTA Design. The estate is one of the borough’s oldest with the majority of the buildings having being built in the 1930s.

HTA’s plan was granted planning in summer 2014 but, because of its size, was required by then London mayor Boris Johnson to give it the green light which he did the following March.

The development will sit across the road from the £1bn Chelsea Barracks scheme in west London which is being developed by Qatari Diar and will have 34 houses, 329 apartments and a 90-bedroom hotel.

Westminster said the tender process for the Ebury Bridge scheme will begin next month when a contract notice will be issued. It will be built in three phases with the first phase expected to cost £97m.

Phase one of construction is only expected to start towards the end of 2020.