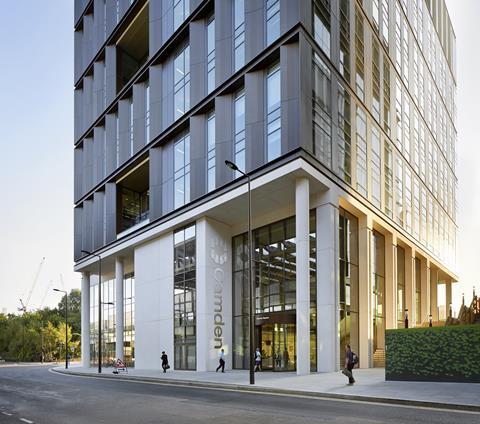 A community building in Camden, London has been crowned the winner of the Prime Minister’s Better Public Building Award for 2015.

Five Pancras Square, designed by architect Bennetts Associates, picked up the award which recognises publicly funded projects which are delivered on time and on budget and add value to a community.

It comes after the building was also named Sustainable Project of the Year for 2015 at this year’s Building Awards in April.

It is one of the first inner-city buildings in the UK to achieve a BREEAM ‘Outstanding’ sustainability rating.

Around 90% of all building materials were responsibly sourced, while an energy efficient ventilation system and solar panels reduce carbon emissions and help Camden Council save around £500,000 a year in running costs.

The community building houses a state of the art leisure centre, a library and Camden Council offices, with the capacity to serve 225,140 Camden residents as well as commuters who pass through the area.

The building was constructed by Kier, with engineering by AKTII and building services by Grontmij. Davis Langdon (now Aecom) was QS.