Contractor was dumped after costs on Peterborough project jumped two-thirds 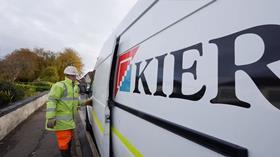 Cambridgeshire county council has begun the search to replace Kier on a road job after axing the contractor over the summer in a row about costs.

The firm, which nosedived to a £245m pre-tax loss last month, was booted off the King’s Dyke crossing on the A605 near Peterborough in July after the £16m scheme, let under a two-stage contract, jumped to more than £26m.

At the time the authority complained that Kier had sent in its final price over four months late.

Now in a contract notice published on the Official Journal, the council is advertising the job again at its original price of £15.8m.

It said: "The scheme was previously awarded as a two-stage design and build contract, for which a detailed design was completed. Cost estimates increased over time and so the authority is now seeking improved outcomes from the market."

It added that it would “welcome value engineering exercises” from would-be bidders. Firms have until 4 November to register their interest, with a shortlist of between five and eight bidders to be invited to tender by 19 November.