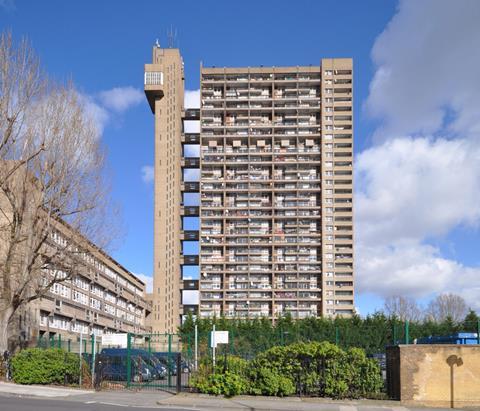 Kensington and Chelsea council has withdrawn its controversial plans to redevelop the estate surrounding the grade II*-listed Trellick tower following a rowdy meeting between councillors and residents.

The Haworth Tompkins-designed proposals would have seen five additional blocks built on the Cheltenham Estate, including a podium at the base of Erno Goldfinger’s 1970s tower.

But campaign group Save Trellick said the new blocks would have “effectively cut the Cheltenham Estate in two, dividing a vibrant and diverse community, and undermining the architectural setting of the site”.

More than 3,000 residents of the estate signed a petition urging councillors to rethink the plans, while a similar number supported a second petition backed by the Twentieth Century Society.

Save Trellick said tensions “boiled over” earlier this month at a meeting of the council as housing chief Kim Taylor-Smith faced questions from residents and councillors about the scheme.

The group said Taylor-Smith “had to fight to be heard over the outrage of angry residents sitting in the public gallery”.

In a video tweeted by the council last week, Taylor-Smith said he had made the decision to “pause” the redevelopment following “recent conversations we’ve had with residents”.

He added: “Let me be clear, we’re still going to build homes on this site… but I don’t want to force things through against residents’ wishes.

“And with that in mind I’ve asked planning officers to withdraw the application and we will engage with the community again to see what might work and what our options are.

“All of us need the Christmas and New Year break to reflect, so we can come back and talk to residents in the New Year.”

Save Trellick also claimed the council had tried to “bypass democratic procedures” by handing the application to junior civil servants rather than councillors on the planning committee.

The council said this was “categorically untrue”, adding: “This was a major planning application that was scheduled to go to a full committee hearing in March before it was withdrawn.

“That would have meant it being discussed, debated and voted on in an open committee.”

Trellick tower was granted its listed status in 1998, while the wider Cheltenham Estate, which includes the low-rise Edenham Way buildings, was listed in 2012.