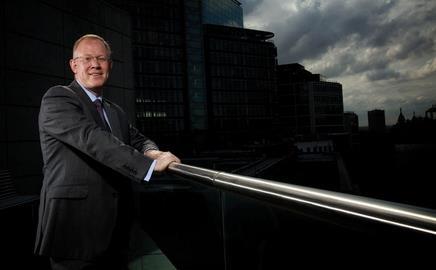 Firms react differently to recession. Some struggle through, some hibernate – and some (for example, Sainsbury’s) launch £1.6bn offensives to grab market share. Emily Wright and Anna Reynolds met the man who’s planning the big push

Stepping inside Sainsbury’s HQ in Holborn is like entering a corporate version of the supermarket – the visitor is met with cheery orange signage and the aroma of warm pastries and fresh coffee.

The effect continues with the blue and orange name badges and the here-to-help-you-locate-the-bulgar wheat-in-aisle-17 attitude of the staff – which even extends to John Rogers, the head of property.

This is appropriate, because like the store staff, Rogers has something to sell: a £1.6bn property programme, to be precise. In May, Sainsbury’s hit the headlines by announcing a plan to accelerate expansion in the recession. The group raised £432m from share and bond issues to fund the growth, which will add 15% of selling space by March 2011. The previous target was just 5%.

As head of property, Rogers is responsible for delivering 2.5 million ft2 of floor space, which makes him a useful man to get to know. And not only does he want to continue this rate of expansion beyond 2011, he wants to hear from firms outside Sainsbury’s’ “flexible” framework, too.

“Persuading the Sainsbury’s board to accelerate our growth plans has been my career highlight,” says Rogers. He’s not the only one who’s pleased. The expansion will require the construction industry to deliver more than 50 stores this year and next, as well as 45 store extensions and 150 Sainsbury’s Local convenience stores.

“Over £1.6bn will go into delivering the growth,” says Rogers, adding that the firm is not just planning a one-off push: “Looking ahead from 2011, the aim is to continue what we are doing, maintain momentum and keep up that pace of growth.”

So why go for growth when so many other firms are shrinking into their shells? Rogers says that the plan is driven by what customers want – a point he repeats throughout the interview. And he has figures to back up his point: the company made a pre-tax profit of £543m in the year to March, a growth of 11.3%.

But this is a competitive sector, and while one eye is on the customer, the other is on its market share, which presently stands at about 15%. Sainsbury’s’ growth spurt is intended to help it overtake Asda (17%) and close ground on the mighty Tesco (31%). Rogers admits as much: “The growth plan will have a big impact on our business. This move puts us somewhere pretty near the top of UK food and retail companies.”

One of Rogers’ tasks is to decide where to put all these new stores, a plan he is in the process of executing with the help of his 90-strong property team. “We’re researching the areas where we feel we’re under-represented,” he says. “The team is given a shopping list of every place in the UK where we want to be and we look into each one to work out if it will be possible and, if so, what size and style of store should go there.”

For the period up to 2011, the team has zeroed in on Scotland and the South-west, particularly Cornwall and Devon.

Just as there is a shopping list of ideal locations, so too is there for the ideal supply chain. To this end, Sainsbury’s has a group of preferred contractors, architects and surveyors (see below). But Rogers is quick to reassure firms that are not on the list that they are not locked out: “We have a framework but that’s not to say we don’t look outside that group. It’s flexible and under constant review. We tender outside it for about 10% of our projects.”

He adds that the Sainsbury’s’ procurement team is always open to approaches: “We want to meet new contractors if they think they have something to offer. From a commercial position it would be crazy not to.”

So who makes the grade? Rogers is looking for a construction partner that can offer reliability, innovation and value for money. “We also look for transparency in the commercial relationship,” he says. “It’s important we develop a real partnership with the people we work with, which means moving into a more open style of business. In the past, things have not been as productive as they could have been because of a lack of transparency.”

Entering into a relationship with a retail giant may cause trepidation. But as far as supermarket scare-stories go, Sainsbury’s is generally considered a pretty decent client – it certainly doesn’t have the fearesome reputation of a certain blue-and-white striped beast. “Sainsbury’s is very reliable and stable. This expansion has given us a strong pipeline of work,” says Robert Sargent, retail director at Stride Treglown, one of the architects on the Sainsbury’s framework.

Surprisingly, Rogers bares his teeth at these words of praise: “We do recognise that collaboration is the way to get best results but that’s not to say we aren’t ruthless. We will push hard for price reductions year on year,” he says, his expression hardening as his hands chop down on the table. He refuses to be drawn on whether this means cutting fees but does say Sainsbury’s is dedicated to a Develop for Less programme that aims to spend less year on year on commercial property, something that, according to him, all the group’s contractors accept: “We negotiate with our contractors based on current market conditions.”

Sargent also hints that working for the group is no holiday: “Obviously at the moment Sainsbury’s has got some quite demanding expansion plans to grow through the recession. We have had to respond to this by working as quickly as possible and by focusing on leaner construction to cut costs where possible. Costwise, let’s just say we’re having to sharpen our pencils at the moment.”

With all this talk of ruthlessness and task mastering, could Sainsbury’s Jamie Oliver exterior crack to reveal the grim visage of a Gordon Ramsay? Just as it seems it might, Rogers slips back into social democratic mode. “That said, we also listen to feedback from our contractors very carefully. We give them the opportunity to get to know and learn from each other by working in regional teams and make them feel like part of the brand.” Nope. Tough but fair, shrewd but cheerful – Sainsbury’s is Jamie all the way.