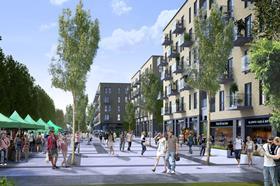 Countryside has confirmed it has entered into a partnership with Three Rivers District Council to build a 500-home mixed-use scheme in a suburb of Watford, Hertfordshire.

The housebuilder has agreed a deal with the local council to regenerate the South Oxhey estate, with proposals for the area including 514 new homes – ranging from apartments to family homes – and over 55,000 sq ft of new retail space.

The scheme also aims to deliver a new market square and improved infrastructure, with better links to the local Carpenders Park train station.

Countryside was chosen by the council as preferred bidder for the partnership in May 2015.

A planning application for the scheme was submitted on 4 January this year, with initial site works expected to start later this year if the project is granted planning permission.

Ann Shaw, leader of the district council, said the partnership will deliver the “new high quality homes and shops that South Oxhey needs.”