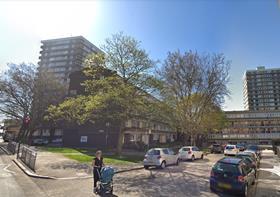 Countryside Properties has been chosen to partner Kingston council to redevelop the Cambridge Road housing estate in Norbiton, to the east of Kingston town centre.

The firm beat regeneration specialists Pinnacle Group and Places for People to the job.

The Cambridge Road estate (pictured), which was used as a film location for episodes of the long-running TV police drama The Bill, currently features nearly 900 homes, including the Childerley tower block. It has been earmarked for an overhaul for a number of years.

Following the demolition of the existing dwellings and rebuilding work the new estate will consist of around 2,000 new homes.

The council said it was “determined to deliver new social homes, some shared ownership and homes for sale”.

Residents will be moved for the duration of the works, which are expected to start in 2020, and those who wished to return to the estate following regeneration would be able to do so, it added.

Graham Cherry, chief executive of Countryside Partnerships South, said the firm was looking forward to working with Kingston council on the next stage of the procurement process to finalise the scheme’s contracts.

“We have been impressed with the level of commitment from the council and residents in conducting this competitive process,” he added.

Councillor Liz Green, leader of Kingston council said: “Over the next few months we intend to work with residents to ensure they are fully informed and can play a major role in the masterplanning process.”

Kingston has received £46m to boost its housing development programme and is expected to be the recipient of a further £67m through the Mayor of London’s “Building Council Homes for Londoners” funding, announced earlier this week.