Ebbsfleet Development Corporation has approved plans from Countryside and Clarion Housing Group for a 281-home scheme in Ashmere in the garden city’s Eastern Quarry site.

The Kent scheme will include 175 one and two bed apartments and 106 houses, with 25% of the scheme being affordable homes either for social rent or shared ownership. 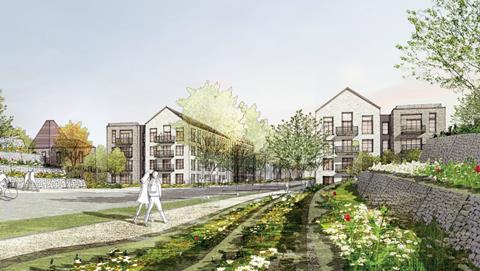 How the Ashmere scheme will look when completed

The scheme was approved by officers at the development corporation under delegated powers, due to the difficulty of holding planning committee meetings under the coronavirus lockdown. It is thought to be one of the largest schemes to have been approved by delegated powers since lockdown began more than a month ago.

The scheme marks the first phase of the proposed Ashmere village, which the development corporation says will ultimately consist of 3,000 homes, a new primary school and a village centre.

The news came as Countryside announced it had been selected by housing quango Homes England to develop two schemes totalling 900 homes, including a package of regeneration sites in Chatham’s historic dockyard area.

In addition, Countryside said it had also been selected to build the Spencer’s Park scheme in Hertfordshire where 100% of the 600 homes planned will be constructed using modern methods of construction. Construction is also set to begin in 2022, with completion expected in 2028.