The projects to build the swimming pool and the main stadium for the 2022 Birmingham Commonwealth Games have been forced to use contingency funds because of the coronavirus crisis.

Wates is carrying out work at the aquatics centre in Sandwell and won the £60m deal two years ago. 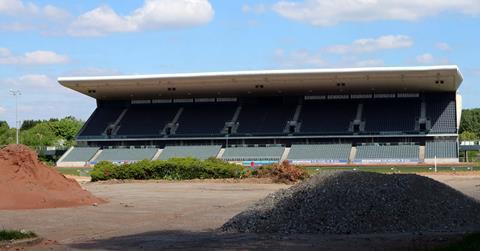 The Alexander Stadium, pictured in May this year, is being redeveloped by McLaughlin & Harvey

McLaughlin & Harvey began work on the £70m redevelopment of Alexander Stadium at the end of May, having won the job earlier in the spring.

Papers prepared for this week’s meeting of Birmingham council’s cabinet said: "Members [of the Commonwealth Games, culture & physical activity committee] were assured that, although some contingency funding had been used for the stadium and aquatic centre because of additional costs incurred due to delays caused by the impact of covid-19, there had been no drastic changes to the plans to deliver the Games.

"The council continue to work with partners to deliver the Games in 2022 and on budget and also to deliver the long-term benefits and legacy to the city and the wider region."

The council also said an analysis of Lendlease's job to build the athletes village is being carried out to work out the impact of coronavirus on the programme's schedule.

Last month Building revealed the department for digital culture, media and sport has been brought in as part of the review being carried out into the village.

Earlier this year, the council said it would have to find more cash or scale back plans for the project adding it was “no longer possible” to build the scheme to a previous budget of £492.6m or to “deliver the village in the way originally envisaged”.

Lendlease is principal contractor on the job which will accommodate around 6,500 athletes and officials during the games and will later be turned into a mixed-use development featuring more than 1,100 homes.

The building packages on the project have been subcontracted out to several major contractors with both Willmott Dixon and Kier working at the site.