Contractor’s £79m project had been due to finish this year

Sir Robert McAlpine’s job to revamp the tower containing Big Ben will now be finished next year because of delays caused by the covid-19 pandemic.

The £79m restoration of the grade I-listed Elizabeth Tower was due to be finished later this year but a spokesperson for the House of Commons told Building completion is now expected in 2022. 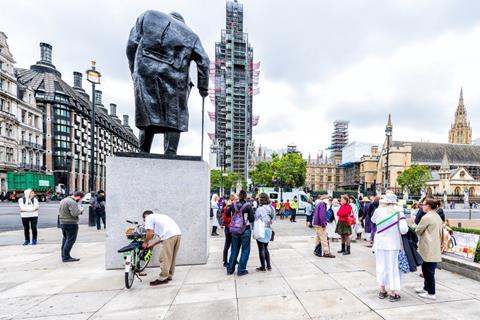 A revised finishing date will be announced once the schedule of works is finalised, the spokesperson added. Work on the tower started in 2017 with the clock and striking mechanism being disconnected in August that year.

But the pandemic meant work on all sites within the parliamentary estate stopped on 25 March last year, two days after the first lockdown was imposed, in order to implement social distancing measures.

Phased reopening did not start up again until 11 May and the Elizabeth Tower, which contains the famous bell, was closed until July leading the Commons to flag the likelihood late last year that the job would be delayed.

> Feature: The restoration of Elizabeth Tower

In 2017, it was revealed that total costs on the project had more than doubled to £61m from £29m. Reasons given included the need for more and complex work on the tower and clock, as well as further ground works to support the weight of the scaffolding. Contingency funding and fire safety costs took the figure up again to its current £79m figure.

Other work on the tower, which was designed by Charles Barry and Augustus Welby Pugin in 1843, includes repairing and redecorating the interior, renewing the building services and making improvements to health and safety and fire protection systems.